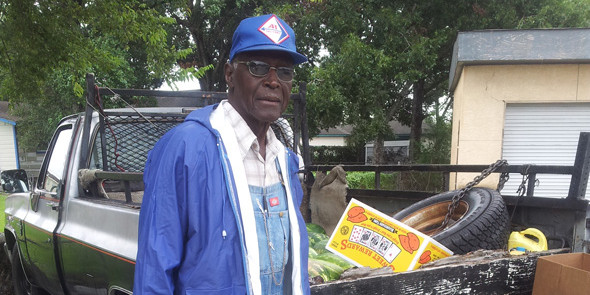 There are certain people in the community who we all see, and don’t really know. Take for instance, the watermelon man up on Cullen next to Dr. Poindexter’s dental office. He’s been there a while. How long? Well, let me put it in perspective.

When the watermelon man started doing business on Cullen, Richard Nixon had just been elected president of the United States, Louie Welch was the mayor of Houston and the Astrodome was just three years old. Do you know his name?

Allow me to introduce Mr. Israel Lacey. Mr. Lacey was born in 1929 in Brenham, Texas. His parents were farmers who, according to Mr. Lacey, grew a myriad of crops, including cotton, corn, peas, peanuts, and yes, watermelon. At the age of 17 Mr. Lacey moved to Houston to look for work. He worked several jobs and eventually landed at the Alamo Iron Works plant as a laborer.

By the early 50’s, the Korean conflict was heating up, and he was drafted into the army. Mr. Lacey served at Fort Hood from 1953 until 1955. During his short military stint, he was selected to participate in a special patrol. The year was 1953 and the Falcon dam had just been completed in south Texas, bordering Mexico. President Eisenhower came to Texas to participate in the dedication ceremony for the dam and power plant. Mr. Lacey was part of an eight man boat patrol who’s mission was to make sure that no one on the lake came anywhere near the ceremony site.

When his two year army commitment was completed, Mr. Lacey moved back to Houston and went back to work at the Alamo Iron Works plant again. This time, he worked as a crane operator. He eventually settled in Sunnyside in 1962 with his new bride and school teacher, the former Miss Charlesetta Williams.

“Unfortunately, my job as a crane operator didn’t last long. The company closed the Houston plant because we tried to unionize,” Mr. Lacey said. He found work at Grocer’s Supply. It was during this time that he ventured back towards his agricultural roots and began to sell watermelon.

“I’d drive my ‘67 Chevy pickup back to Brenham on the weekends and buy watermelons in Hempstead on my way back to Houston,” Mr. Lacey said. “I would show up to work with a truckload of watermelons on Wednesdays. Wednesday was payday at Grocer’s Supply, so my coworkers were ready and able to buy those sweet Hempstead watermelons. On Saturdays, I’d sell the rest at the old Lincoln drive-in on Cullen.”

During this same time, Mr. Lacey took a job as a truck driver for the McKenzie Equipment company. By 1974, he had moved his watermelon business to the parking lot of what was then Dave’s tire shop. After having his truck hit by an errant driver near the curb along Cullen, Lacey moved back to the spot next to Poindexter Dental, where he has become such an ever present figure in Sunnyside.

Recently, I stopped by with my children to buy a melon. “How much are the watermelons today?” I asked. “Well, pick any one you want. $7.00” he replied. Since my children were with me, I, like any decent Dad, feigned expertise in the art of picking a good watermelon. I inspected the stem and checked the color of the bottom of the melon. Finally I gave it the all important thump. I don’t really know what I’m listening for, but my grandfather and my father always thumped the melons, so you best believe that I do too. Did I pick the best one? Well I don’t know if it was the best on Mr. Lacey’s truck, but it didn’t last long in my house.

View all posts by Spotlight Staff →