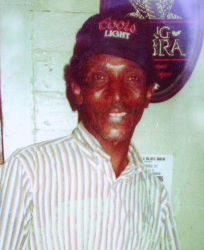 Neatly tucked away right off Alabama and Ennis, is a 1.25 acre pastoral oasis of organic gardening paradise. That is the location of the famous Alabama Community Garden. This Third Ward landmark is home to 56 individual rows of assorted vegetables and fruit trees.

The idea of the garden was the brainchild of Mr. Verious Smith. Back in the seventies and eighties, it was commonplace to see groups of men gathered in parking lots in the early evening. They would stop by on their way home from work and enjoy camaraderie and cold beverages with coworkers and friends. Mr. Smith and his cohorts used to gather to “tailgate” in the parking lot of the then, Little Rudy club. On one particular evening, en event happening at the row houses across the street struck a chord with Mr. Smith.

He summoned the attention of his good friend, J.D. Green. They both watched as several residents of the units patiently waited to be given a portion of pinto beans that one of the older, more fortunate ladies was sharing. That particular woman had adult children who would help her make ends meet, and she in turn would cook food such as the beans  and cornbread, then distribute amongst her neighbors to help them  make it through tough times. As Mr. Smith watched the woman scoop the beans into assorted containers and mason jars, he turned and said, “I see hunger.” Not only did Mr. Smith see hunger, he also saw duty.

Mr. Smith didn’t helplessly shake his head and say, ‘Somebody should do something about this.’ He didn’t sit by idly and wait for someone to give him a grant before he got moving. He and his brothers, Voydoll and Christian started working on finding a way. Mr. Smith noticed a vacant lot next to the Little Rudy parking lot. After doing a little research, he discovered that the lot was owned by Texas Southern University. Christian was able to make contact with the right people at TSU and Mr. Smith was able to arrange a lease for the lot. Part of the agreement was that the men would keep the lot clean.

Mr. Smith’s vision was simple, but not without challenges. The lot was overgrown and had to be cleared. Additionally, there was no water supply to nourish the proposed garden. In stepped TSU. The university supplied equipment and manpower to help clear the land. The water problem was solved by the help of a neighbor. Mrs. Curry, who lived in a house adjacent to the property, agreed to let the gardeners run a line to connect to her water. They just had to pay any amounts above her usual water bill. Funny how things work out, when people are willing to work together.

True to the original mission of the garden, the three Smith brothers, along with J.D. Green and others such as Bobby Cathey, used the garden to help feed people in need. According to Mr. Green, the group would not only supply many of the residents with fresh organically grown produce, they would also purchase chickens, ducks and other meats to help tide the residents over to the end of each month. Please note that these were not men looking for tax write offs, votes or recognition. They were hospital workers, ranch hands and other laborers who saw a need and got to work doing something about it.

The good works of the Alabama Community Garden did not go unnoticed. In 1998,  Urban Harvest, a nonprofit organization dedicated to promoting community gardens, youth gardening education and farmer’s markets, came calling. Urban Harvest extended an invitation for the Alabama Garden to become an affiliate. They soon recognized the Alabama Community Garden as the oldest organized community garden in the city of Houston. They also provided resources and connections that led to its expansion. Over 180 volunteers from Texas Southern and various businesses such as Bank of America built 56 raised beds that are now present on the property. Others donated tools and portable buildings to the project.

The Alabama Community Garden crew also forged a partnership with the SHAPE Community Center. The garden provides vegetables and fruit, which SHAPE uses to prepare weekly meals for participating Elders. They also work with the students at SHAPE’s Kozi Shule, or work school.

Some things have changed since Verious Smith first envisioned the garden. Mr. Smith and his brothers have all passed on, and a myriad of people have picked up the charge, As coordinator, J.D. Green is determined to stick to the original mission of the garden. On any given day, one can find the regulars tending to their plots and communing in the shade of sheltering trees. David, Orlando, Terry, Bobby, Wade, Hermann, James and J.D. are still welcoming visitors with friendly smiles and they’re still feeding people. λ

View all posts by Jyron Walls →